We are part of a world-wide revival of long-extinct European martial arts, often called 'Western Martial Arts' (WMA) or Historical European Martial Arts (HEMA). The primary aim of HEMA is to develop a functional martial art from the teachings of the masters of the past - the lost art of the sword. 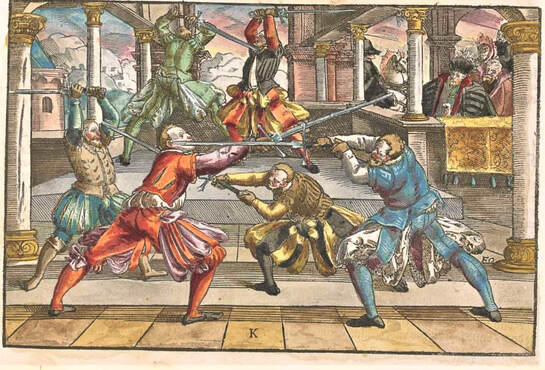 Our primary source is a fencing manual by Joachim Meyer - his 1570 'Art of Combat'. Meyer was the first master in the German tradition to really spell out "the basics" with a sword in a simple but comprehensive way.

Joachim Meyer represents a period of transition within German martial culture of the time, between the medieval knightly combat traditions of the Middle Ages, and the new, elegant, Renaissance-inspired styles of rapier fencing in the Early Modern Period. As such, at ASA we also study sources both before and after Meyer's time, to gain a more holistic understanding of Early Modern German fencing culture. Our teachings span a period of time of over 150 years, from medieval masters of the longsword and sword and buckler from the 1450s, all the way up to the teachings of rapier master Salvator Fabris and his students in the early 1600s.

Periodically, we also dabble in other martial systems, such as 19th Century Military Sabre, Bartitsu (a Victorian style of kick-boxing), German folk-wrestling, Spanish rapier, and others. We heavily encourage our students to go back to the sources themselves, and to learn, experiment, and take part in the resurrection of these long-lost fighting forms.

Come and Fence with us!

We have classes for Adults, Kids, and also for theatrical fencing as well. No prior experience needed, all are welcome!

We have classes five days a week in Adelaide's North-East and South, see our timetable, locations and fares here.

If you have any questions about anything at all, don't be afraid to shoot us a message.

We eagerly look forward to crossing blades with you!

It is my most sincere hope that if you practice this art and heed these principles, then you will attain the perfection you desire - Salvator Fabris